A popular term you will hear in relation to emotional abuse is “gaslighting.” It may be a confusing term because it’s based on a kinda antique movie but it is used to describe a very common (if not the #1) problem with emotional abuse. Very simply it’s making the victim think they are crazy.

The term is based on a 1944 movie called “Gaslight.” In it a man marries a woman, not for love, but for access to search and steal her deceased aunt’s prized jewels. Naturally no woman would agree to this, so he puts on a show for her. He acts loving and caring and then when she notices inconsistencies he lies and covers it up by making her think she’s crazy.

He leaves the house at night (and she’s not invited because she’s so “ill”) and sneaks back into the house through the windows in the attic. When he turns on the gas lamps in the attic, all of the house’s lights dim for a moment because they are all on the same gas lines. (See, kinda antique, right?) It was a major clue to the wife that something was up but she had been taught not to believe her own eyes, only her husband’s truth. He did sneaky stuff to solidify his truth as the accepted one, like move things around the house or put things in her purse and act like she was stealing things from him and just forgetting about it. Pretty sinister stuff. It’s pretty harsh to use a term based on this movie about someone you love, isn’t it? I thought so.

I thought so because I think I kinda gaslit myself.

I remember the time I realized the beauty of the phrase, “well maybe I misunderstood.” I was a teenager and I found great power in the art of letting things go. In a disagreement with my sister about what color the car was that just passed? Let it go! Don’t necessarily give in but give her the ability to think she was right; “Maybe I didn’t see it right” and voila! Argument over! No need to argue anymore.

So I took this healthy and good realization out into life and it helped my relationships. If something wasn’t worth being argued over, I didn’t. I admitted that I could be wrong and moved on. Things were great.

But things in my relationship to my husband quickly got one-sided. When things are one-sided, small shifts grow massive over time. Times I used the “maybe I’m wrong” trick turned into “remember, you were wrong.” The times I said, “maybe that is the best way” became, “that is always the best way.” Not good.

An emotional abuser isn’t gaslighting to steal jewels, he’s trying to steal being right. When you have to be wrong so often in order to let someone be right, you start to think you’re crazy, unworthy and less than.

Every day being separated from my narcissist has led to more and more realizations of things he stole from me. More accurately, maybe there were many things that I gave away to him that I shouldn’t have.

Here’s an example: chili. I believed I couldn’t make good chili. Every time I made it my husband put it down. I just didn’t do it right. In my early wifey days I originally made chili with just tomato juice, burger, and chili beans. He said it couldn’t be called chili, it was too runny to put on a hot dog so it was more like soup. So I tried a different recipe. Something else was wrong… over, and over and over again… over years and years. Sometimes there was a specific complaint; sometimes it was very vague or just a look; sometimes he gave me a compliment… with a negative twist on the end. It was all very unsteadying. This was gaslighting and the result was complete.

I. Fail. Chili. After years he still would tell others I didn’t know how to make chili, it was “more like soup” even though I had long ago ever stopped making anything remotely runny. That didn’t matter. The thievery was complete. I was incapable of making chili and everyone, including me, knew it.

Chili is not something to stress over. In the real world you say, “Maybe I got it wrong” and move on. Yet years of “maybe I was wrong” somehow got me pushed over into “I am wrong” territory. Even without my husband here to give a single negative glance, I don’t trust my chili. He stole my ability to make chili although it would be more accurate to say I actually can make more variations of chili than most people. But that is what gaslighting does. The abuser takes your own healthy ability to not take yourself so seriously, turns you around, and lets you believe you are wrong. Crazy even. The craziness comes in when my brain says “I can make so many variations of chili and often it’s tasty.” But my heart says, “Maybe I can’t make chili.” They don’t match up. Can I make chili or can’t I? Second-guess. Ruminate. Argue. Give in, give up. Fight for self-esteem. Suppress. Years go by adjusting responses to make things work. Things shift, change, and you are an inconsistent mess. You no longer trust yourself and somehow you miss the key player who was there all along. You only know you don’t trust your own self anymore.

And it’s not just chili. All of life is a game; a game the abuser must win at all costs. She spends years and years gathering your cards. “Chili? I’m better than you at that. Give me the chili card.” “Child-rearing? Oh that’s mine.” “I’m a better dancer.” “Oh no, don’t try buying clothes for me, I clearly have the better fashion sense.” “I pick the best cars because I know the best features that matter.” “You can’t be trusted with the money.” Snatch, snatch, snatch. It may take years for her to artfully get a certain card from you (by gaslighting) but she WILL get it. Big, small, she gets them all. A gaslighter is stealing being right. And it starts by letting you give them as many cards as you will without a fight. In my case: “Well, maybe I was wrong….” Our generosities are used against us. 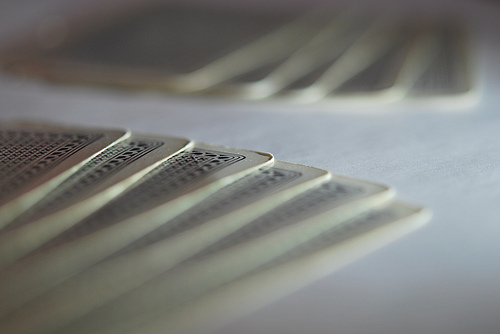 In the movie the woman is finally clued into the reality and she snaps out of it and walks away tall, vindicated. In reality I think that would be pretty rare. Either you turn away empty and broken, (so few cards left) or, like in my case, my husband turned and walked away tall throwing all the cards in the air saying, “I don’t wanna play anymore, you’re cheating anyway.” And I’m left on the ground gathering what’s left of who I am after it’s been marred up by being in his hands so long.

However, any of those endings are better than begging for your own cards back all the while trying to hide the cards you have left so she doesn’t try to take them too.

If you think that you or someone you know is the victim of gaslighting, get help! Gaslighting is a me vs. you game and CAN’T be played with more people. Let people tell you AND BELIEVE THEM that you have a good fashion sense, that you’re a good mom or dad, that your contribution to the chili scene is valuable. Talk to a therapist and let them help you rebuild your deck. It’s dangerous to get so low as an emotional abuser would have you go.

I don’t believe that all emotional abuse relationships HAVE to end in separation or divorce but you do absolutely have to learn how to share cards to have a healthy relationship. Cards should be regularly and freely exchanged back and forth, given from both sides and never taken without a sincere apology later when you realize your goof. (Hey, we all get a little snatchy from time to grumpy time.)

Often, by the time gaslighting is recognized patterns have settled in that need outside help to view and correct. Don’t be embarrassed to ask for help. When it comes to gaslighting a little help will go a long way and people are willing to help. Gaslighting is just shifting reality so that the abuser wins. With someone else to help hold down reality where it belongs, gaslighting can’t happen.

And let’s not forget this little extra gem we learned: appreciate that when you turn on a light, the rest of them aren’t affected. Yay, building code advancements!